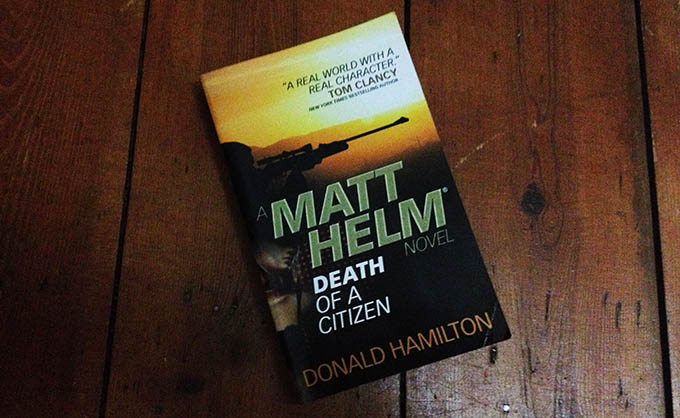 The name Matt Helm meant absolutely nothing to me until a few weeks ago. Titan Books are re-releasing the first two adventures of this US Government counter-agent whose career included 27 novels (which began in 1960) spanning more than three decades, four films, and a network television series. And I’d never heard of him! Have you? Do you think a certain British secret agent stole his thunder?

The press materials prefer to cast Helm as the original Jack Bauer, which is actually closer to the truth than Bond. Helm is a no-nonsense bad-ass (*cough* think Jack Reacher *cough*) whose adventures don’t get bogged down with tech-speak or company lingo. No, in the Matt Helm world, there are good guys and bad guys, and the descriptive prose doesn’t go much further than that. We don’t meet Helm’s boss until late in the first novel, and even then, we find out very few specifics. 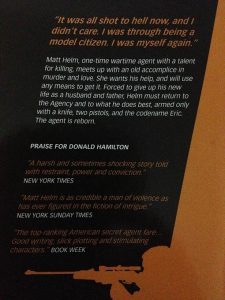 And what a refreshing thing this is! The writing flows hot like lava – Helm is never thinking too hard, or away from the action for long. He’s a man with a hit first’ or pay the consequences attitude, after earlier years under cover in Europe during the War (which is brushed away from continuity in later novels, apparently). He meets women, affairs are short and end brutally, and the very un-scientific nature of the story-telling means I read ‘Death of a Citizen’ never concerned with it’s 1960 setting, as it’s never an issue. Men are men, women are women, and the only thing that gives a clue to the time period are the cars (something you’ll enjoy I guess if you’re a classic car nut) and the fact that no-one has a mobile phone. Nope, Matt Helm novels are all about the intrigue and the action.

Which goes a long way to explaining why Dreamworks bought the rights in 2002 and Paramount now hold them, with Spielberg rumoured to be interested in directing. The novels are so concerned with the action and the straightforward plot mechanics that they could easily be updated.

When asked to describe the character of Matt Helm, Donald Hamilton replied “He’s a nice guy, he just happens to kill people for a living.” The books sold more than 20,000,000 copies worldwide before disappearing from bookstore shelves.

I enjoyed the new Matt Helm re-issues HUGELY. I think they’re brilliant page-turners unconcerned with trying to create a complicated world or any unneccesary detail. They work like Helm does himself – straight to the bone and without a second’s rest.

I doubt I’ll read a more unexpected delight all year. Move over Lee Child, the original’s back! HIGHLY RECOMMENDED.

DONALD HAMILTON was born in Uppsala, Sweden, in 1916. In 1924 he and his parents immigrated to the United States. He attended the University of Chicago, gaining a Bachelor of Science degree in 1938, then served in the U.S. Naval Reserve. His writing career began in 1946 with short stories for Collier’s and The Saturday Evening Post. His first novel was Date With Darkness, published in 1947, and altogether he published 38 novels. He lived much of his life in Santa Fe, New Mexico, where he was an active outdoorsman and hunter.