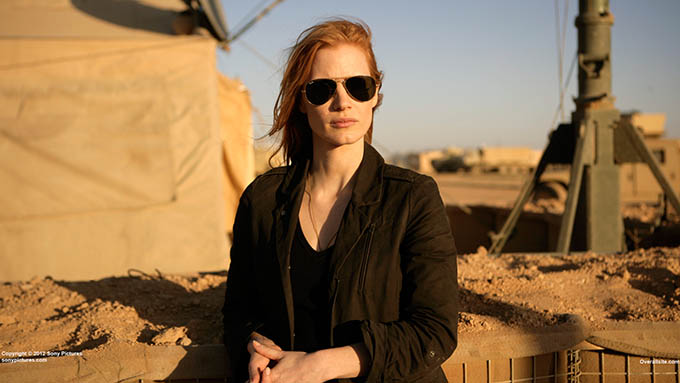 I’ll place the best films of 2013 in the date order they released, as I can’t really pick which should go higher or whatnot.

‘Zero Dark Thirty’ (a military slang for an unspecified time in the early hours of the morning before dawn) ends with the raid on Osama bin Laden’s complex, executed after midnight on the morning on May 2nd, 2011. The preceeding storyline begins with the attack on the World Trade Centre (tastefully shown with a black screen and some recovered telephone audio from a lady in the Towers) and follows the US government’s decade-long search for OBL (or UBL as they call him in the film, ‘U’ for Usama). That decade-long search involves plenty of torture, failed leads, and an eventual endgame when many in power are questioning whether the search is even any longer worth it.

‘Zero Dark Thirty’ reunites the Oscar-winning team of director-producer Kathryn Bigelow and writer-producer Mark Boal (The Hurt Locker) for the story of history’s greatest manhunt for the world’s most dangerous man. It’s as tense as ‘The Hurt Locker’, even though most of the film either involves torture of suspects (which is a lot less gratuitous or horrifying than I expected) or of Maya (Jessica Chastain) pressing superiors for one more chance to catch OBL. Maya is a composite of real people involved in the search, and perhaps because of that, we never find anything out about her, simply that she’s dedicated to the cause. Chastain’s performance is another rock-solid string in her burgeoning bow though (‘Tree of Life’, ‘Take Shelter’, ‘The Debt’), and she’s got a great support cast of Tony Soprano, Captain Jack Harkness, Link from ‘The Matrix’, and Elizabeth Bennet – take your pick of which you think is the most ‘eye-poppingly’ surreal.

Actually watching how the operation went down (a twenty-odd minute sequence) is incredibly gripping, and for something so simple, it’s surprising to see a gust of wind nearly derail the whole thing! The Navy SEAL team are remarkably restrained considering what they carry out (I’m sure some more chest-beating must have gone on for real).

‘Zero Dark Thirty’ isn’t particulary gung-ho, but it does tell the story strictly from the US point-of-view, with no Arabic or Asian nation given a chance to voice their opinion (much of the film takes place in Pakistan for example)

‘Zero Dark Thirty’ is fantastic entertainment, but I’m not quite sure that it really illuminates anything important about the decade-long search. There is a slight feeling of a comedown once it’s over, much like Maya probably feels after her career-long quest. What now? Is the world a safer place?